“We have forgotten how to be good guests, how to walk lightly on the earth as its other creatures do” – Barbara Ward

Long-overdue bush greetings from our little piece of paradise!

Nov 2019 was an exciting one with the opening of The Last Word Kitara, now part of The Last Word group, a joint venture we are so excited about!
Let’s not forget about Nzumba, our homely gem, with a perfect location!

We are also so thankful for the like-minded passionate teams that we have at both camps, ensuring everyone’s stay is a memorable one!

I write at the beginning of South Africa’s 21-day lockdown.
In this worldwide pandemic, we wish all our readers health & strength!

This edition will cover our full summer period & you will see the contrasts from photos from Oct/early Nov to more recently.
From the below, you can see that we had a slow start to our rain this season, but certainly caught up from the second half of Nov. Despite what the professionals predicted – which was below average rainfall – we went over our seasonal average & the bush is transformed into a lush paradise that we haven’t seen for years, with the grass thick & high…..as Stefan said one morning returning from a drive: “the bush is like pea-soup”. But we are happy beyond measure that we go into our winter with ample food. 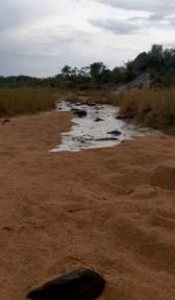 The Klaserie River flowed consistently, with varying extents, throughout the
season. One of the many highlights was literally watching the river come down for the first time on the 22nd Nov.
With the fantastic rains upriver, the Olifants River was higher than usual for this time of the year.

So, as you can see, the difference in vegetation from the steenbok to the impala pictures.
Very interestingly, in Frikkie’s photo, you will see a very light “albino” impala, a very unusual sighting, & happy within its herd. Impala lambs started arriving mid November.
As you can imagine, general game has been in their element with the abundance of food available to them.
We’ve enjoyed seeing good size herds of giraffe & zebra & antelope.
Our Nzumba herd of Wildebeest have done well with their breeding this season, with 2 calves.
Kitara has a very cute baby Waterbuck whose mom keeps close to the camp.
Some interesting sightings include 5 ground hornbills, civets, several sightings of small spotted genet, a baby & adult porcupine (separate sightings), various sightings of the African wildcat, a cobra, an impressively sized mamba approx. 3.5m long, 350 vultures together & let’s not forget the angry honey badger that trapped himself in a dustbin at Nzumba.

Birdlife always abounds in our summer months with the migrants making their way
back for the summer in their best colours, including our trusty Woodlands Kingfisher.
Kitara remains the home of the scops & barred owlets.
The African fish eagles are always present when the river is running, as well as at Nzumba waterhole. The highlight of the season was the return of the vast flocks of queleas again, as well as their nesting site on our property. 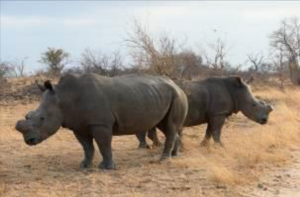 Sightings of our dehorned rhinos remain of good quality & consistent.
Strangely, from the beginning of March, the sightings dropped drastically & they could not be found.
With lots of water & food around, they are not restricted to the areas close to waterholes or rivers. Quite something how quickly we have got used to not seeing rhino with horns! In this positivity, however, we still realise our rhino remains at high risk. 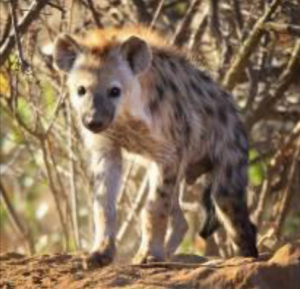 Hyena sightings are incredible – from youngsters inquisitive to the point of sniffing Stefan’s camera lens, to hyena stealing kills, to hyena killing an impala in the Nzumba waterhole with guests watching. The majority of our guests enjoy several differing sightings during their stay. 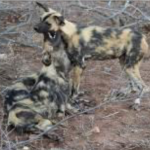 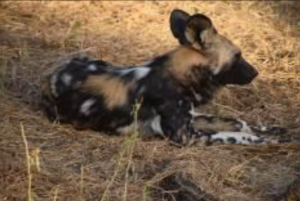 Whilst the wild dog sightings were not constant, which is natural for dogs always mobile, we did have some incredible sightings. Most sightings for two-thirds of the 6 months were around Thompsons, including pups, but middle-end March there were some great sightings around Nzumba waterhole/airstrip & Dundee.

The wild dog vs hyena interaction is ongoing & in March one dog was killed by a hyena – an apex predator kill. The pack sizes for 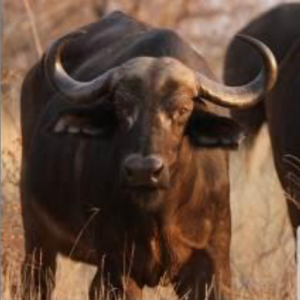 Whilst most sightings of buffalo have been dagga boys, the majority of our guests enjoyed the sighting as part of their stay.
These dagga boys were always seen close to the Klaserie & Olifants River on various parts of the property.

The lack of large herds is due to the lack of food available to sustain them.
In mid-Nov, Frikkie saw a herd of 100 strong close to the Klaserie Head Quarters.

With the abundance of food, we expect to see herds moving back into the area.

Our elephants never disappoint!
Guests were treated to numerous sightings during their stays.
The majority of the sightings were breeding herds, along with single bulls. From the sighting reports, herd sizes ranged from 18 – 30.
Before the rains arrived, there was stress within the herds due to lack of food but most of the herds were relaxed & the waterholes on our properties were frequented.
There was a bad boy who just loved to break into the camps at night, thankfully not significant damage, but always keeping our managers on their toes!

It has been an absolutely fascinating 6 months with our lion population! We are all suitably confused but at the same time hoping that some of our visitors will choose to make our property their territory! We have had 35 different sightings over 6 months.
Ranging from a pride of 6 (these are mostly on the Olifants property, Mpisi Link & Marula Loop), 3 males on a giraffe kill on Thompsons, 2 females were seen by Stefan tracking, 4 males at Nzumba waterhole after the hyena impala kill, 3 males on Nkwazi… And so it goes on.

Majority of the sightings are Thompsons / Nzumba-Dundee area / Olifants, however, towards the end of March there was a pair of mating lion on Emfuleni.
It is creating much excitement, as it has been a while since a pride settled in the area since the legendary Dundee Pride … Perhaps our next newsletter will bring some good news!

We recorded 50 different sightings of leopard over the last 6 months.
Sightings ranged throughout our & neighbouring properties.
Each sighting was incredible & varied including female leopard on a kill, different males & a male feeding in a tree.
Kitara’s resident young female killed an impala on the grass in front of room 4 at Kitara, she dragged the kill into the riverbed when everyone was asleep, which then got stolen by a hyena.
Her visits to camp have definitely declined, this could be due to a lot of guest movement.
Towards the end of March, Stefan found a young male leopard with a kill up a tree – this is a new leopard to the area, a gorgeous boy.
As is the norm, with the increase of lion in the area, the sightings of leopard dropped slightly.

Please write in our on-line guest book, your feedback is much appreciated!

For those of you who would like regular updates on exciting happenings and aren’t already on our Facebook, please “like” our Klaserie Camps page. We look forward to seeing you there!

We are on Instagram, so for all the Instagramers out there, please follow us and keep up to date on the wonderful photos we share: #klaseriecamps